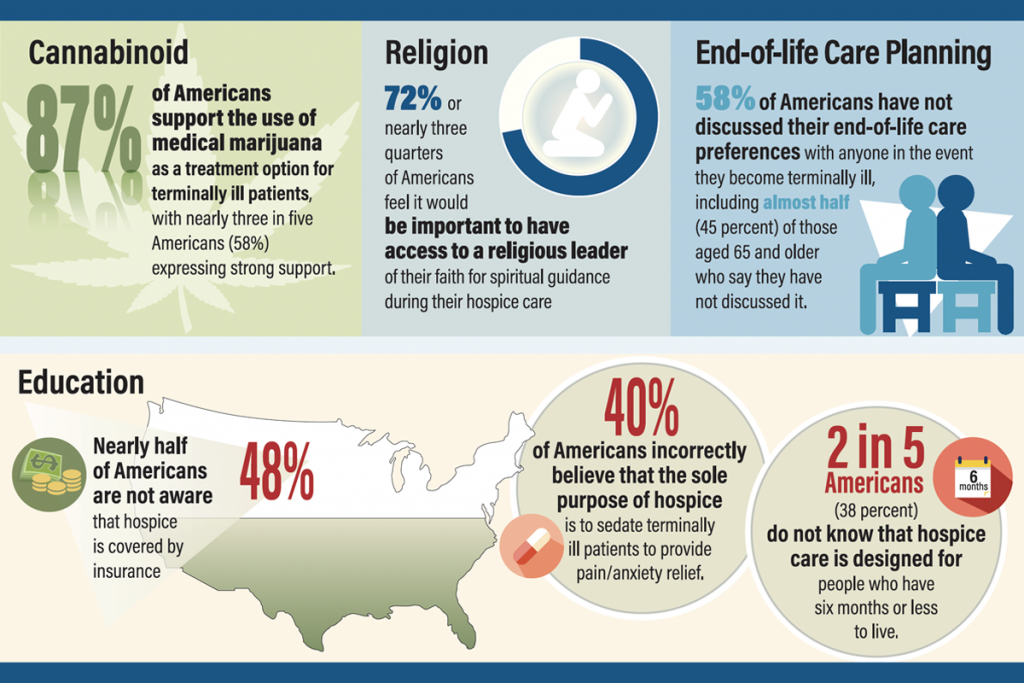 MorseLife Hospice and Palliative Care recently conducted an online survey to find out more about people’s beliefs and attitudes towards end-of-life care. The top three insights included overwhelming support of medical marijuana, opinions on religion when dealing with a life-limiting illness and overall understanding of hospice care.

The results of the survey will help MorseLife determine which aspects of hospice care need the most public attention and identify opportunities to raise awareness throughout the greater community.

The survey found that 87% of Americans support the use of medical marijuana as a treatment option for terminally ill patients, with nearly three in five Americans (58%) expressing strong support.

Interestingly, the hospice care study also revealed that if they were terminally ill and enrolled in hospice care, nearly three quarters of Americans (72%) feel it would be important to have access to a religious leader of their faith for spiritual guidance during their hospice care.

MorseLife was recently selected to participate in a pilot study on the use of medical marijuana as an alternative treatment to manage pain. Its hospice program is the only program in Palm Beach County offered by an organization with a history of serving the Jewish community.

Findings show that many Americans are unsure or incorrect about key aspects of hospice care including purpose, length of care and costs. For example, nearly half of Americans (48%) are not aware that hospice is covered by insurance, while 40% of Americans incorrectly believe that the sole purpose of hospice is to sedate terminally ill patients to provide pain/anxiety relief.

The survey also found that 58% of Americans have not discussed their end-of-life care preferences with anyone in the event they become terminally ill, including almost half (45%) of those aged 65 and older who say they have not discussed it.

While hospice care is a difficult subject for many, there are many innovative services available through hospice, like palliative care, and art, music and massage therapy, that can improve lives. People need to know that these services are within their reach.